The adaptation of chemical vapor deposition (CVD) production of graphene so that it’s compatible with roll-to-roll processing is transforming graphene manufacturing. That effort is being led by companies like Graphene Frontiers, based in Philadelphia.
However, the production of single-crystal graphene on copper foils in a CVD process remains a fairly time consuming procedure. Fabrication of centimeter-size single crystals of graphene still takes as much as a day.
Now researchers at Hong Kong Polytechnic University and Peking University have developed a technique that accelerates the process so that the growth happens at 60 micrometers per second—far faster than the typical 0.4 µm per second. The key to this 150-fold speed increase was adding a little oxygen directly to the copper foils.
In the research, which is described in the journal Nature Nanotechnology, the China-based researchers placed an oxide substrate 15 micrometers below the copper foil. The result: a continuous supply of oxygen that lowers the energy barrier to the decomposition of the carbon feedstock, thereby increasing the graphene growth rate.
The expectations were that the oxide substrate would release the oxygen at the high temperatures inside the CVD surface (over 800 degrees Celsius). The researchers confirmed this through the use of electron spectroscopy. While the measurements indicated that oxygen was indeed being released, the amount was still fairly minimal. Nevertheless, this minuscule amount of oxygen proved sufficient for their purposes because the very small space between the oxide substrate and the copper foil created a trapping effect that multiplied the effect of the oxygen.
In their experiments, the researchers were able to successfully produce single-crystal graphene materials as large as 0.3 millimeter in just five seconds. That, according to the researchers, is more than two orders of magnitude faster than other methods in which graphene is grown on copper foils.
The researchers believe that this ultrafast synthesis of graphene makes possible a new era of scalable production of high-quality, single-crystal graphene films by combining this process with roll-to-roll methods.
Counterintuitively, speeding up the process of producing single-crystal graphene films may not automatically lead to wider adoption of graphene in various devices. Just a few years ago, graphene production was stuck at around a 25-percent utilization rate, and there is no reason to believe that demand has increased enough to have dramatically changed those figures. (Graphene producers will tell you that if demand for CVD-produced graphene suddenly spiked, volume could be doubled nearly overnight.)
Nonetheless, speed in manufacturing is always an attractive option for any product. It just might not offer a change to the graphene landscape as much as a few “killer apps” might.
Keywords: chemical vapor deposition (CVD); Graphene Frontiers; single-crystal graphene; Hong Kong Polytechnic University; Peking University;  graphene;

Posted by ledepi wafer_Powerway Wafer Co., Limited at 2:28 AM No comments:

Keywords:  A1. Characterization;  A1. Crystal morphology;  A2. Single crystal growth;  B1. Inorganic compounds;  B2. Semiconducting materials; B3. Solar cells

Posted by ledepi wafer_Powerway Wafer Co., Limited at 2:15 AM No comments:

•
Synthesis of JDF-L1 large single crystals with orthogonally lamellar architecture.
•
New observations on phase transformation between ETS-10 and JDF-L1.
•
Different effects of K+ and F− ions on crystal phase and growth orientation.
•
Square sheets with 3-dimensions of ca. 15, 15 and 1.5 µm in orthogonal orientations.

Facile procedures were reported for synthesis of sizable lamellar JDF-L1 crystals. Phase transformation between ETS-10 and JDF-L1 was experimentally demonstrated founding on the role of K+, Na+ and F− ions in crystal growth. Factually, K+ ions were confirmed not to participate in the crystal growth of JDF-L1. High concentrations of only Na+ and F− ions in initial gels facilitated the formation of lamellar JDF-L1 differing from normal JDF-L1 in crystal morphology and unit-cell dimensions.

Posted by ledepi wafer_Powerway Wafer Co., Limited at 1:06 AM No comments: 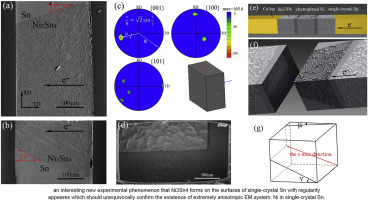 Posted by ledepi wafer_Powerway Wafer Co., Limited at 2:23 AM No comments:

Email ThisBlogThis!Share to TwitterShare to FacebookShare to Pinterest
Labels: single-crystal

We present results on the hydrothermal growth of (

(A  =  K, Rb, and Cs) as precursors. The growth proceeds by the hydrothermal ion exchange of Li/Fe–O–H for K, Rb, and Cs, resulting in a stacking layer of (

)OH sandwiched between the FeSe layers. Optimal growth parameters are achieved using high quality A 0.80Fe1.81Se2 single crystals added to the mixtures of LiOH, H2O, Fe and C(NH2)2Se in an autoclave and subsequently heated to 120 °C for 2 d, to obtain highest quality single crystals. The obtained crystals have lateral dimensions up to centimeters, with the final size related to that of the precursor crystal used. All (

precursors. Comparative studies of the structure, magnetization, and superconductivity on the parent A 0.80Fe1.81Se2 and the ion-exchanged (

Posted by ledepi wafer_Powerway Wafer Co., Limited at 12:27 AM No comments:

Abstract
A perfect organic crystal while keeping high quality semiconductor/dielectric interface with minimal defects and disorder is crucial for the realization of high performance organic single crystal field-effect transistors (OSCFETs). However, in most reported OSCFET devices, the crystal transfer processes is extensively used. Therefore, the semiconductor/dielectric interface is inevitably damaged. Carrier traps and scattering centers are brought into the conduction channel, so that the intrinsic high mobility of OSCFET devices is entirely disguised. Here, very thin pentacene single crystal is grown directly on bare SiO2 by developing a 'seed-controlled' pentacene single crystal method. The interface quality is controlled by an in situ fabrication of OSCFETs. The interface is kept intact without any transfer process. Furthermore, we quantitatively analyze the influence of crystal thickness on device performance. With a pristine interface and very thin crystal, we have achieved the highest mobility: 5.7 cm2 V−1 s−1—more than twice the highest ever reported pentacene OSCFET mobility on bare SiO2. This study may provide a universal route for the use of small organic molecules to achieve high performance in lamellar single crystal field-effect devices.

•
Single crystals of type I Na–Si clathrate, Na8Si46, were synthesized by using Na–Sn flux.
•
Preparation conditions of the single crystals were cleared.
•
The details of the crystal growth process were investigated.

Posted by ledepi wafer_Powerway Wafer Co., Limited at 2:29 AM No comments:

If you need more information about single crystal, please visit our website:http://www.qualtiymaterial.net, send us email at sales@qualitymaterial.net.

Posted by ledepi wafer_Powerway Wafer Co., Limited at 12:30 AM No comments:

A new approach to β-Ga2O3 single crystal growth was studied, using the vertical Bridgman (VB) method in ambient air, while measuring the β-Ga2O3 melting temperature and investigating the effects of crucible composition and shape. β-Ga2O3 single crystals 25 mm in diameter were grown in platinum–rhodium alloy crucibles in ambient air, with no adhesion of the crystals to the crucible wall. Single crystal growth without a crystal seed was realized by (100) faceted growth with a growth direction perpendicular to the (100) faceted plane.